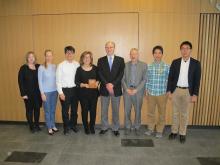 An Open Letter To the Members of Parliament of Canada

An Open Letter To the Members of Parliament of Canada Thank you for the opportunity to connect with you today. My name is David Hill, I am 55 years, a husband and father of three, and I live in a small town in Alberta - but only for the next 2 to 5 years, according to my doctor. I have a rare, terminal cancer called Mesothelioma that has only one cause, and that is contact with the mineral Asbestos. The link between asbestos contact and fatal illness has been apparent since 200 AD when Roman overseers noticed that their slaves working in mineral mines were dying. The first documented death from contact with asbestos occurred in 1906. The medical community demonstrated a conclusive link between working in close proximity to asbestos and terminal organ cancers in 1924. In 1930, the disease was linked with abdominal and respiratory disease, and in 1941 that disease became known as mesothelioma. Since that time over countless people, including 100,000 Americans working in the ship building and maintenance industry alone have died far ahead of their time. In Canada, we seem not to have kept track of our own body count; our government accountants and policy wonks chose economic gain over human life and continued to refute the cancer danger well into the 1950’s. The only time I have been in contact with asbestos in my life was during my service with the Royal Canadian Navy Reserve when I was a university student. You don’t need to be a miner or an industrial worker to get this disease; all you need is a single, microscopic encounter to fatally poison you. I was a navigating officer trainee posted to naval ships that were constructed between 1944 and 1952. They were packed with asbestos, the wonder material Canada was promoting in that era. My bed aboard ship had an asbestos clad pipe running over it, and we learned to fight fires in an asbestos filled simulator. No one advised us that there was any danger, our officers told us everything was safe and to get on with the job of defending our fellow Canadians. I was in the Naval Reserve for 17 years, and was promoted and decorated for my service. As a Reservist, I was proud to be “twice the citizen” as Winston Churchill called us. But I did not know that my dedication to our country would be rewarded with an early and terrible death. Mesothelioma is an insidious disease, it lies in wait for 30 years, and then arises quickly and finishes you off. Microscopic asbestos fibres invade your respiratory and digestive systems undetected, and settle in the lining of your lungs or abdomen. They cause a cancer that grows inside your living tissue, very, very slowly, resulting in thickening and swelling of the mesoteric linings, with lesions that erupt inside like scabs, and form grey tendrils about an inch long that look a bit like shag carpet. As the disease spreads and matures, infected tissues connect with your vital organs and begin to kill you from the inside out; after that, the disease metasizes and spreads rapidly throughout your lymphatic system. There are no warning signs or incidents that trigger detection. Symptoms begin with a persistent cough or stomach cramp, followed by sense of fatigue and a bit of weight loss. By the time you realize you might have something other than a cold, is already too late, and you are gone within 2-5 years. There is no cure for mesothelioma, only chemotherapy, radiation, and surgery targeted at delaying mortality. I was diagnosed in 2015 and will have the operation to try and prolong my life; there is a 40% chance I may last another 10 years with constant care. I have lived a good and productive life, I have served my family and my country well, and I lie awake at night wondering how I deserve to meet such an end. Asbestos is now everywhere in our environment. It’s in the insulation and floor tiles, pipes and ductwork of your schools, and in the concrete, bricks, pipes and fireplace cement, heat, fire, and acid resistant gaskets, pipe insulation, ceiling insulation, fireproof drywall, flooring, roofing, lawn furniture, and drywall joint compound of your homes. In 2011 it was reported that over 50% of homes, schools, government and commercial buildings still contain asbestos, despite the current regulation of installation of new asbestos products. It only takes a momentary, microscopic connection with the mineral to cause infection. The long latency period of asbestos related cancers means that people infected today will not be diagnosed until 2045. Canada's mesothelioma cancer rate is now one of the highest in the world. Our persistence in denying the toxic effects and in permitting its production and use in thousands of products has laid the groundwork for exposing us all. About 2.1 of every 100,000 Canadians are diagnosed each year and it is expected that the death rate will climb for several more years. We have a political obsession with our national debt, I often hear about how we should not be passing our debt to our grandchildren; Parliamentarians, we have a latent asbestos debt in this country, and if we do not act to remove this horror from our environment, we are murdering our grandchildren. As of 2014, 44 countries have banned use of asbestos in their environments, including Australia, the UK, most of Western Europe, the Middle East, South Africa, Argentina, South Korea and even Mozambique. Why does Canada, a supposedly advanced and progressive nation, continue to choose asbestos over the lives of its future generations? Only you can answer that. My time will soon be up, but my children, and someday, I hope, my grandchildren whom I will never see, will continue to build our great society. I implore you to act to ensure their health and safety, and to give final meaning to my life, and to the lives of the thousands of asbestos victims now lost, and to the hundreds of thousands of victims yet to come. Sincerely, David Hill Water Valley, Alberta

Click on link Mark Hume's Globe & Mail story on asbestos.
With the number of asbestos-related deaths continuing to climb across Canada, a B.C. union leader is calling for the urgent creation of a national registry of public buildings and marine vessels containing the heat-resistant fibrous mineral that causes cancer.
http://www.theglobeandmail.com/news/british-columbia/bc-union-leader-ca…

As reported by Canadian Press on CTV news

September 26th, 2015 is Mesothelioma Awareness Day. The incidence of mesothelioma, an extremely aggressive cancer, continues to rise. It is now one of the top causes of death in the workplace in Canada. Although the use of new asbestos in Canada has decreased, it remains in old homes and office buildings; it doesn’t just go away. We need your support to fight this terrible disease - to help raise awareness, the critical need for prevention, provide education and support to those affected by mesothelioma as well as to build a network of health care professionals with diagnostic and treatment expertise across Canada for victims of mesothelioma. Until recently, Canada exported asbestos and continues today to import asbestos in items such as brake linings and pipes.

(TORONTO, Canada – January 20, 2014) – Results of clinical research that treated mesothelioma with radiation before surgery show the three-year survival rate more than doubled for study participants afflicted with this deadly disease, compared to treating with surgery first. The findings, published online today ahead of print in the Journal of Thoracic Oncology (DOI 10.1097/JTO.0000000000000078), chart a viable route to treat patients more effectively and also improve their quality of life and potential survival, says principal investigator and lead author Dr. John Cho, radiation oncologist at Princess Margaret Cancer Centre, University Health Network (UHN). Dr. Cho is also an Assistant Professor, Department of Radiation Oncology at the University of Toronto. “The patients in our study experienced shorter treatment, fewer complications and speedier recovery,” says Dr. Cho. “The three-year survival rate more than doubled to 72% from 32%.” Mesothelioma is an aggressive malignancy that starts in the lining of the lung and progressively restricts and invades the whole organ.

Read the entire news release here in the attachment to this article.

The CMF is proud to announce a brand new initiative on Facebook to enable mesothelioma patients, loved ones and bereaved to connect with one another, share experiences and seek support from others in similar situations.  We are hearing from more and more Canadians citing feelings of loneliness, isolation and helplessness in their struggles with mesothelioma or in caring for a loved one with the disease.  It is our hope that this initiative will help to bring people together to support each other through these difficult times.

If interested in joining this private, invite-only group, please send a message to the CMF Facebook page or to info@cmfonline.org with your email address and we will issue an invite.  We hope to hear from you soon.

CMF sponsored workshop on the use of PDT in treating meso

In November 2012, the Princess Margaret Hospital (PMH) Mesothelioma Research Program hosted a 2 day visit by Dr. Keith Cengel, a specialist in radiation oncology and photodynamic therapy (PDT) from the University of Pennsylvania Hospital. Dr. Cengel gave two lectures, the first on emerging technologies for image guided radiotherapy followed by a second on photodynamic therapy for mesothelioma and other thoracic diseases. Photodynamic therapy is a promising new treatment for mesothelioma patients that uses light energy to kill cancer cells. Dr Cengel and other researchers at the Perelman School of Medicine, University of Pennsylvania have shown that when used in combination with lung-sparing surgery, survival rates of patients with pleural mesothelioma are significantly improved, sometimes more than two years.

The objective of Dr. Cengel's visit was to give the PMH mesothelioma research team an overview of his research and the results of PDT in mesothelioma. Both lectures were well attended by surgeons, radiation oncologists, medical oncologists and physicists from Toronto General Hospital and Princess Margaret Cancer Center. As a result of this visit, the University Health Network (UHN) Mesothelioma Research Program is planning to start photodynamic therapy in selected patients with mesothelioma and, as well, will develop collaborative work with the research team in Philadelphia.

Dr. Cengel's visit was made possible by the CMF's Education and Training Fund. This special educational grant was given to the Princess Margaret Hospital Foundation in Toronto in 2011 and in 2012 to the UHN by the CMF for their Mesothelioma Research Program. The Fund was established to expand the educational mandate of their Program. Learn more about the CMF fund here.

To learn more about the Mesothelioma Research Program at Princess Margaret Hospital, Toronto, download the new 2012 report here.  CMF funds continue to support education and training activities of the Program.